I think these processes are some of the most interesting in cell biology so far, but you can judge for yourself.

The cell's main focus is on membrane transport because they must allow for the movement of molecules into and out of their bodies.  Most animal cells use 1/3 of the energy they produce on the sodium-potassium pump so I'm sure you are not surprised that cellular transport is the major activity found in cells.  However, not all of these processes require energy.  Diffusion is the movement from high to low concentration (a.k.a. going with the concentration gradient).  Let's take a gander at the various types of transportation through the plasma membrane.

Simple diffusion is when a solute is allowed to travel through the lipid bilayer.  The rate depends on 1) SOLUBILITY in the lipid bilayer, 2) CONCENTRATION GRADIENT steepness, and 3) SIZE (does matter).  Usually small inorganic molecules like O2, CO2, NO, and H20 simply slip past the plasma membrane between phospholipids.  Simple diffusion is non-energy requiring, but it is also non-selective.

Aquaporins are protein-lined channels that allow water (polar) to travel through the membrane, which has a nonpolar middle section.  These specialized proteins are made of 6 transmembrane helix proteins.  They function as a homotetramer, and each subunit has a water channel.  There are 10 different types of aquaporins.  Most are constitutive (always expressed), and some are regulated.  An example are the aquaporins in kidney tubules which move from the cytoplasm into membranes to remove water from urine as a response to vasopressins  Aquaporins are non-energy requiring, but they are selective for water.

Ion channels are transmembrane proteins that allow ions to move across membranes with their concentration gradient at high rates.  These channels can be control movement by different gating methods.  Ligand gated ion channels allow for transport once a signal molecule triggers a conformational change.  Voltage gated channels are sensitive to changes of electrical charges in the membrane.  Mechanical forces also contribute to gating. Here's something to think about.

Potassium ion channels (shown below/left and also in the background) prefer K+ over Na+ 10,000 to 1.  How do they do this?  You can't say the size is perfect for K+ and not Na+ because if you check your periodic table, potassium is larger than sodium.  A channel large enough for the potassium ion is definitely large enough for the sodium ion so try thinking about how ions exist in an aqueous solution.  Well, they are solvated meaning that the water molecules hang onto the ions.  Both ions do not fit with waters surrounding them.  The dehydration event for K+ is favored over Na+.  The explanation for this is that the partial negative charge on the oxygens of carbonyl groups of the helices found along the pore of the  ion channel (shown below/right and also in the background) will surround the ions like the water molecules once did.  The potassium ion will be chosen over the sodium ion to move through the ion channel because the carbonyl groups will pack around the K+ in a better, tighter fashion than around the sodium ion.  K+ will be the one to undergo dehydration and it will now fit into the channel. 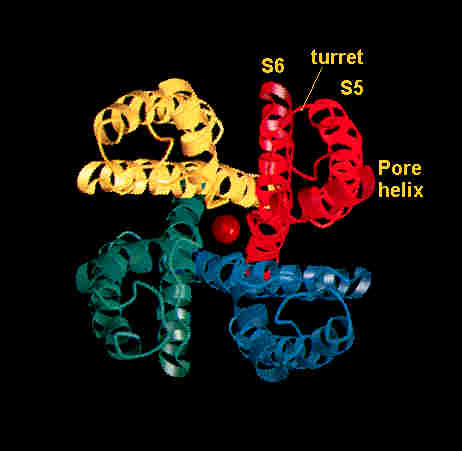 In this channel, there are at least three binding sites for K+ so three potassium ions will be in close proximity to each other inside the protein.  Their electrostatic repulsion accounts for the rapid movement of potassium ions through the ion channel (106 - 109 ions/sec).  I must point out that ion channels bring in another variable with gradients.  Not only do you have to consider the concentration gradient, but you must remember the charge gradient as well.  Both are referred to collectively as the electrochemical or chemical/potential gradient, which is actually a form of energy.  Ions moving through ion channels are driven by both factors.
Ion channels are non-energy requiring, and they are highly selective.

Now moving on to facilitated diffusion.  This process uses the concentration gradient, but the twist is that it also receives help from transporters.  A great example is the glucose transporter.  It acts like an enzyme in that its kinetics will allow it to move a small amount of glucose at a rate proportional to the concentration, but with the substrate concentration about the KM, a gradual rate will proceed as it occurs just below VMax.  This transporter is also stereospecific.  D-glucose is preferred over L-glucose.  Remember, the glucose transporter is not a channel.  It has binding sites and will change conformation to facilitate diffusion when glucose binds to it.  It refolds to its original shape after glucose has been released, all of this for a polar glucose molecule to move through the nonpolar portion of the membrane.  Now here's an interesting biochemical "trick."  Once the glucose has been pumped into the cell, how does the transporter continue to diffuse more of the sugar in.  Will the concentration not build against the inward movement?  Well, the imported glucose is immediately phosphorylated, and technically it is no longer glucose (it's glucose with a phosphate on it).  The gradient continues to favor input of the sugar because the previous molecules have been slightly altered, and the phosphorylated glucose is not shipped out.
Facilitated diffusion is non-energy requiring, and it is highly selective.
We're not done with glucose transporters just yet.  There are plenty of them.  Here are some names:
Glut 1, Glut 2, Glut 3, Glut 4, Glut 5, and Glut 7 (number 6 turned out to be for fructose - OOPS!)
Some cells will release glucose while others primarily receive.  Either way, these transporters do the job.  The correct transporter is distributed according to the cell's need.

GLUT 2 - found in cells of organs that release glucose into the blood (liver cells, epithelial intestine cells).  It has a HIGH KM for glucose so its rate will be proportional to the amount of sugar available.
GLUT 3 - found in the plasma membrane of neuronal cells of the brain.  It has a LOW KM for glucose so its rate will always have a high affinity for the sugar and keep importing at a rate near VMax.
GLUT 4 - found in muscle and fat cells.  It is MOBILIZED from its storage granules inside cells and therefore is responsible for glucose uptake in bursts when it does get to the plasma membrane.


Let us delve into the primary active transport examples.
As noted, ATP hydrolysis fuels this transport against concentration gradient.  Ion pumps are involved in the three classes: P-type, V-type, and F-type

P-type (in plasma membranes and endoplasmic reticuli): These transporters form a covalently phophorylated (P for phosphorylated) protein intermediate as part of the transport process.  Included in this class are ion pumps for Ca2+, Na+/K+, H+, and Na+/H+.
The well known P class ATPase, the Na+/K+ pump (a.k.a. Na+/K+ ATPase), consists of a transport protein made of 2 alpha (for transport by ion pumping) and 2 beta (for regulation) subunits.  The bottom line: for every phosphate used to run the transport protein, 3  Na+ are exported while 2 K+ are brought in.

Basically, the protein (in the E1 conformation) binds 3 Na+, and hydrolysis of ATP causes a phosphate to induce a conformational change (to E2) in the transporter.  The sodium ions are released and 2 K+ are bound to the same protein which loses the phosphate to regain its original E1 conformation so that the potassium ions can be imported.  This mechanism is what creates and maintains steep concentration gradients like 12 mM of Na+  inside a cell versus 145 mM of Na+outside the cell and 139 mM of K+inside a cell versus 4 mM of K+outside the cell.
The lesser known P class ATPase, the Ca2+ ATPase, is located in the lumen of the sarcoplasmic reticulum of muscle cells, in the plasma membrane, and in the membranes of the endoplasmic reticulum.  They release 2 calcium ions from the cytosol into the sarcoplasmic reticulum, extracellular space, or the lumen of the ER for every ATP molecule used.  The Ca2+ concentration in the sarcoplasmic reticulum is small.  It is smaller in the cytosol.  The KM is the smallest meaning a constant release rate near VMax.

V-type (in vacuoles, tonoplasts, lysosomes, endosomes): These pumps use ATP without forming a phsophorylated protein intermediate.  H+ pumps are in this group.

F-type (in bacterial plasma membranes, mitochondral membranes, chloroplast thylakoid membranes):  No phosphorylation here either, but they do synthesize ATP.  (Details are found in the Energy Transduction section)  Once again, H+ pumps are in this group.

Active transport is energy requiring, and it is highly selective.


Let us delve into the secondary active transport examples.
This entails transport against a concentration gradient coupled to an electrochemical gradient.  The principal coupling ion in animal cells is Na+.  How is the Na+ concentration regulated?  That's right, the Na+/K+ pump so secondary active transport is actually indirectly coupled w/ ATP hydrolysis.  Now it makes sense that the cell uses 1/3 of its energy for the Na+/K+ pump.

In the image to the right, glucose enters the apical plamsa membrane of the epithelial cell of the intestine by secondary active transport.  One glucose molecule and Na+ (actually 2 sodium ions) are carried inside due to Na+'s  concentration gradient (created by the Na+/K+ pump on the lateral surface which keeps cytosolic sodium ion concentration low).  The glucose molecule comes along for the ride.  This is an example of a symport (cotransporter) because glucose (against its concentration gradient) and Na+ (with its gradient) are both moving in the same direction (into the cell).  The movement of 2 sodium ions into the cytoplasm, which is lesser in sodium ion concentration, changes the conformation of the transport protein, and glucose is released.

[The coupling of a species moving in the opposite direction of the entity it is coupled with) describes an
antiport (exchange protein, exchanger).]


There are over 200 of the so called ABC transporters.  They have multiple functions (including active transport of ions), but they all contain common ATP- and nucleotide binding domains (NBDs).  The corresponding polypeptide of the gene responsible for cystic fibrosis is an ABC transporter which usually functions as a Cl- channel.

Back to main page